Ultimate Pumpkin Cheesecake that will make you think twice about making  pumpkin pie this year.  This is just too good to miss out on. 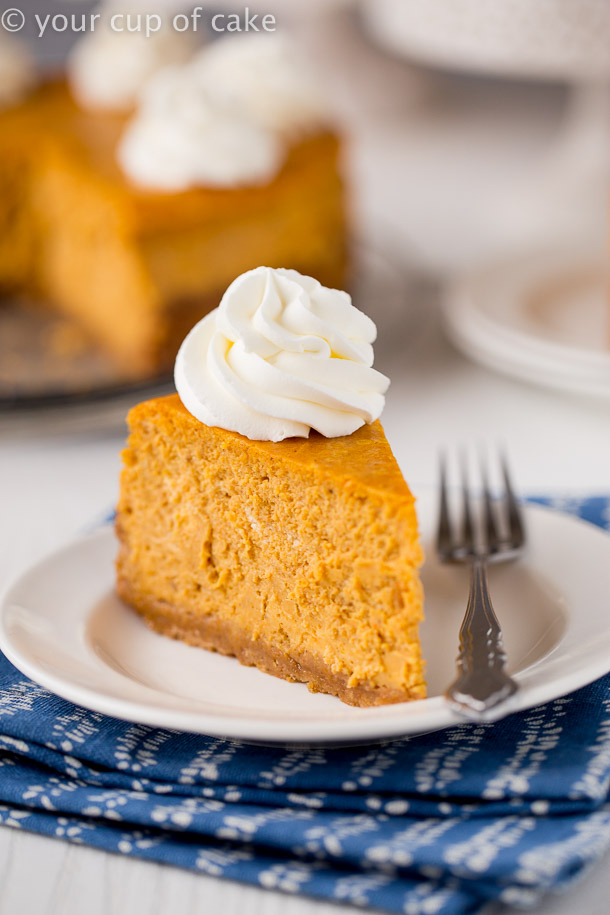 Pumpkin pie holds a dear place in my heart, but this Ultimate Pumpkin Cheesecake may be giving the pie the boot this Thanksgiving!  It’s thick and creamy and with a dollop of whipped cream on top you can’t say no.  I was in pure heaven when I bit into a piece of this cheesecake.  I won’t lie, I topped it with more whipped cream than in the photo and it was the best idea ever.

Why is this better than Pumpkin Pie?

Well first of all, it’s very similar because all the same flavors are there.  But becasue it’s more dense, I was totally full after a small piece.  With pumpkin pie I always seem to go back for seconds and thirds.  So if I brought this to a party, it would feed way more people than a pie! Also, I know the filling is more complicated than a regular pie but the crust is more simple! I just zipped it together in my blendtec and dumped it into the pan.  No rolling, so messy floured counter, no holes, no trying to decide how to make the crust look fancy… none of that nonsense!  This is always why I looooove my pumpkin pie bars!

Cheesecake makes me nervous sometimes.  So I did a bunch of research before I made this one to make sure I knew all the tricks.  Did mine crack? Yes, because my water bath wasn’t as full as it should have been.  But it wasn’t a bad crack and I covered it up with a little whipped cream!  problem solved!  The major problem you want to avoid is a sinking cheesecake.  The major reason this happens is people whip their filling or beat it too quickly so it gets lots of air in it.  Slow down.  Don’t mix everything together on high or even medium-high.  Mix things together fairly slowly so you don’t end up with a sunken cheesecake. 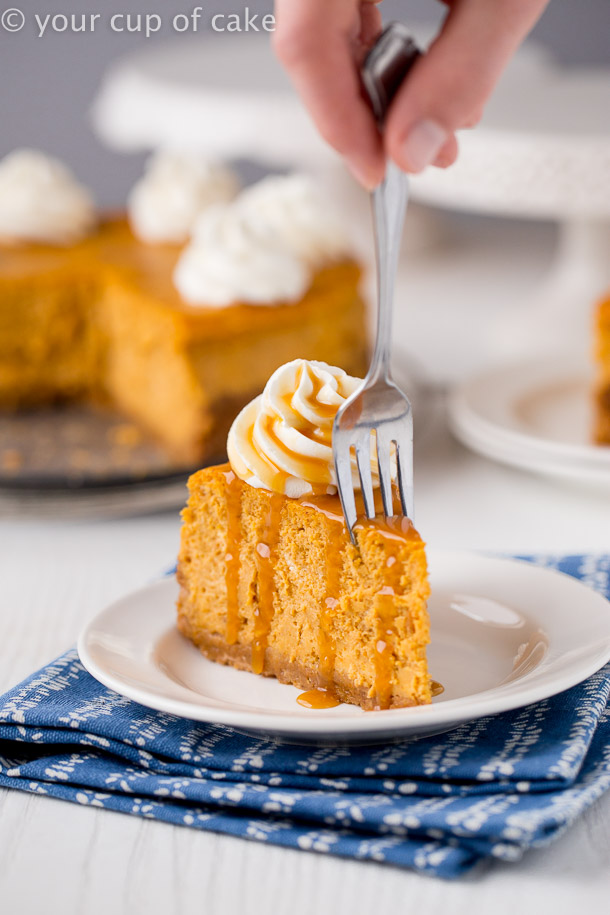 My husband is turning into a professional fork holder.  His only complaint is he wants to eat it before I take photos! And check out that drizzle of caramel sauce… I couldn’t help myself. 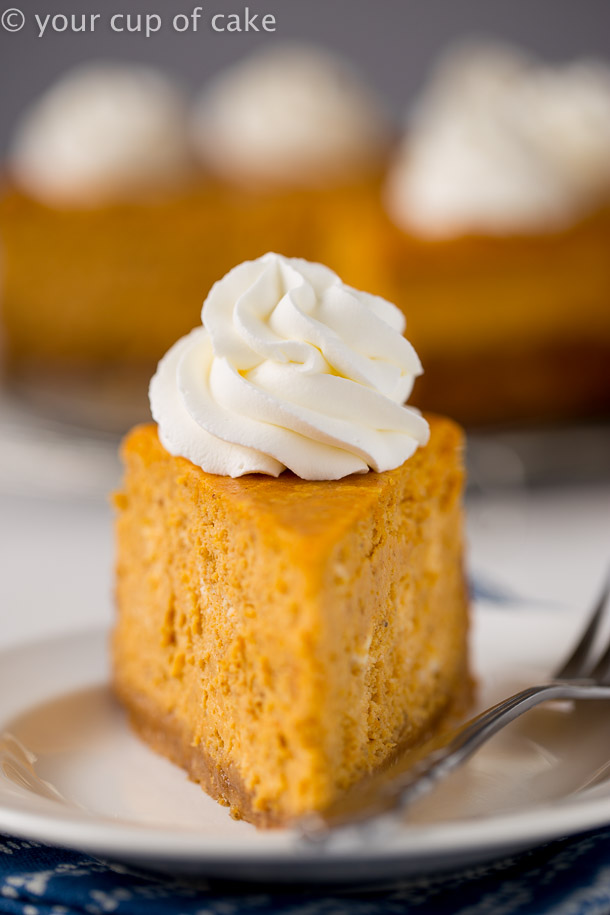 This Ultimate Pumpkin Cheesecake is rich, creamy, and full of fall flavors.  I’m pretty in love with this dessert.  The Cheesecake Factory is great, but this one took the (cheese)cake.  Plus, if you don’t want to drive there or spend the moolah on one piece of cake, just make it yourself! 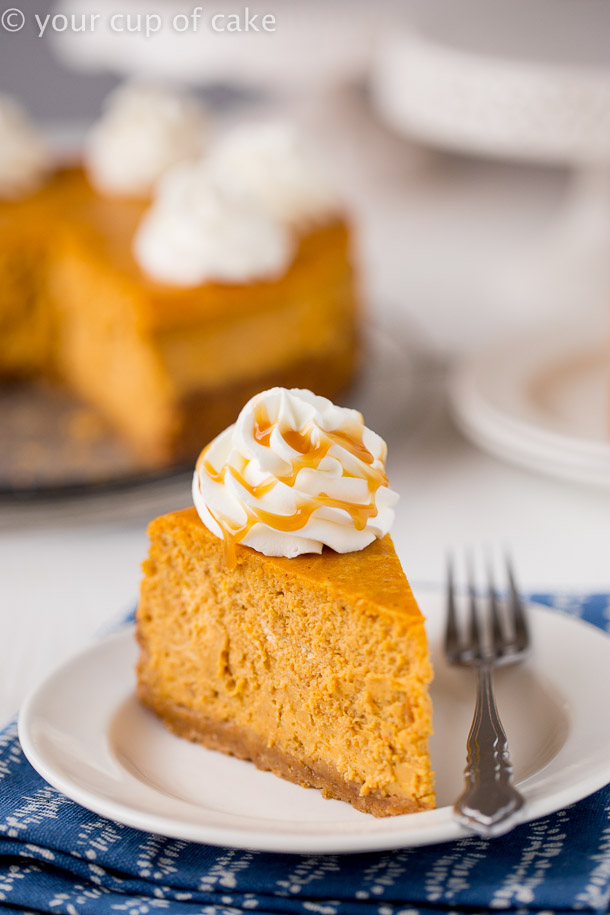 Happy Thanksgiving everyone! I hope you all get a break from work to enjoy family, friends, football and good food.  Eat up. 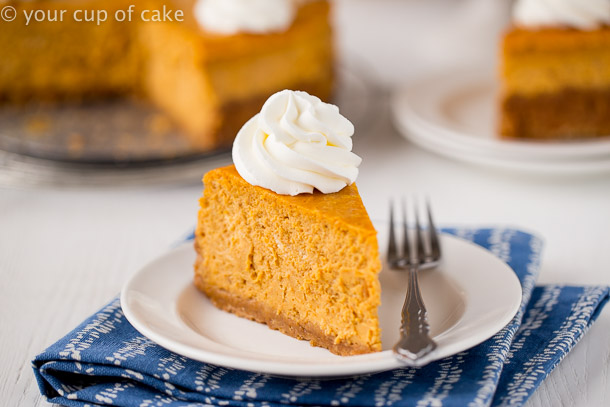 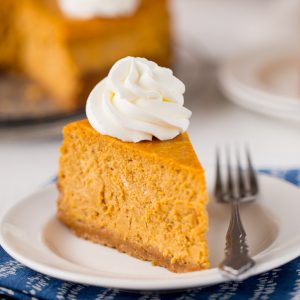 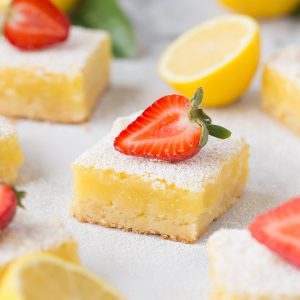 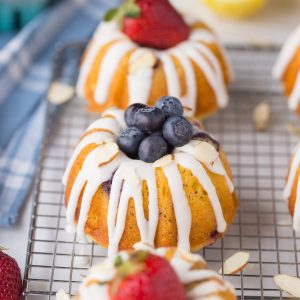