These cupcakes are so easy to make and dangerously delicious! The banana cake batter comes together in about 3 minutes thanks to a yellow cake mix and the topping is crazy simple… just 2 ingredients! Whipping cream and banana instant pudding mix!  It’s the perfect type of frosting for all those people who say they don’t like frosting because it’s not too sweet.  The whipping cream gets thick when you whip it so you don’t need a bunch of powdered sugar to make it stiff. Enjoy my fluffy Banana Cream Pie Cupcakes! 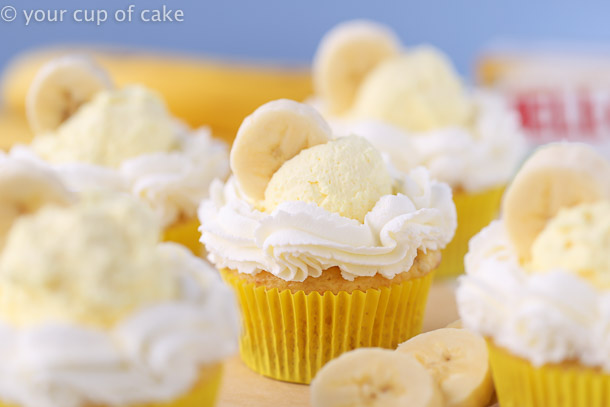 Okay! We talked a little about the cake but the whipped cream frosting is the best part!  I whipped up some heavy cream using 1 tsp of the banana instant pudding mix to stabilize it (read the next paragraph about that) and then I whipped up the rest of the heavy cream with more instant pudding mix! I used more to really get that banana flavor and to thicken to the texture of a mousse! I piped a little border around the cupcake to make it look like a whipped cream crust and then filling the hole with my banana “mousse filling.” Of course I had to top it off with banana slice but a Nilla wafer would also look cute! 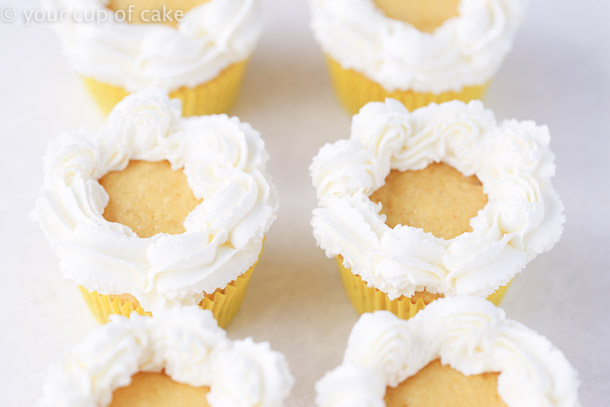 I used one of my food scoops to fill in in the space with a mound of “Banana Mousse” but you can just use a spoon! (I used the purple handle food scoop.) 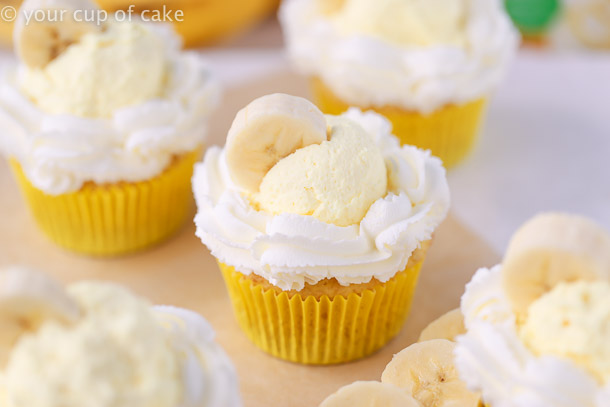 How to Stabilize Whipped Cream With Jell-O

Stabilizing whipped cream is a must! I used to bring angel food cake to friends but by the time I reached their house the whipped cream was melty! I couldn’t frost cupcakes with it either unless my house was an ice box and I served them a few minutes later! It was a mess.  Most people recommend adding unflavored gelatin to stabilize their whipped cream but I don’t have that in my pantry!  So I use Jell-O! More specifically, I use instant pudding mixes, usually the white chocolate or cheesecake flavor because they’re “white” and wont change the color of the whipped cream.  But for these Banana Cream Pie Cupcakes I used banana pudding because I wanted the color and flavor! 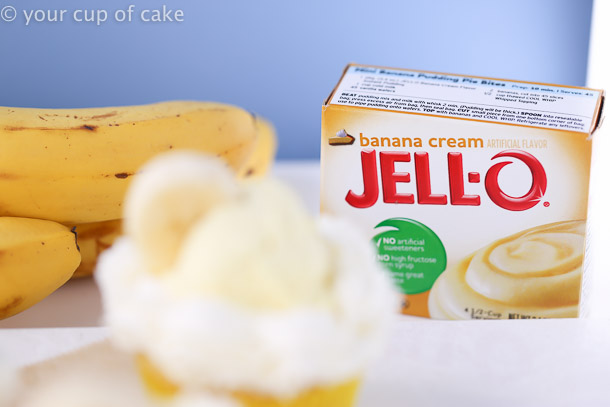 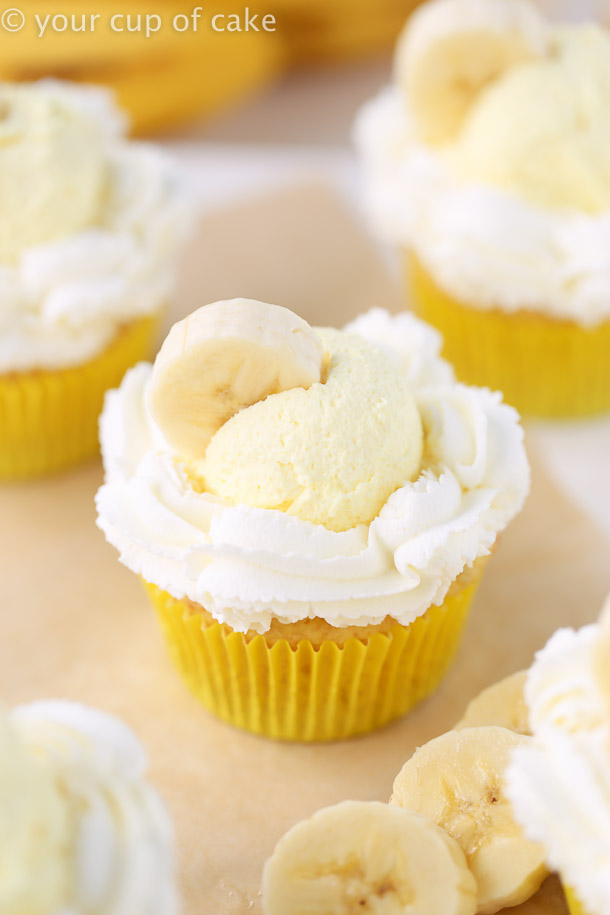 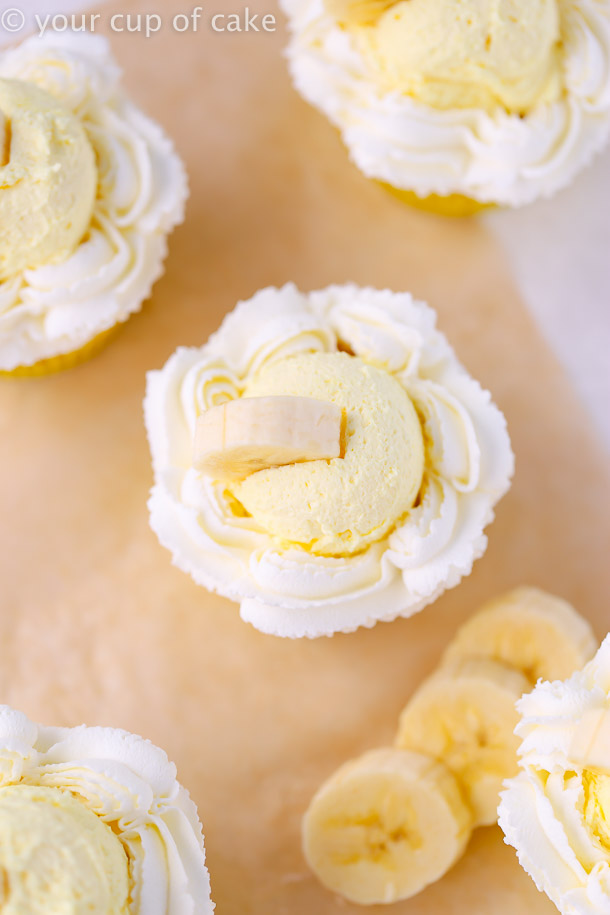 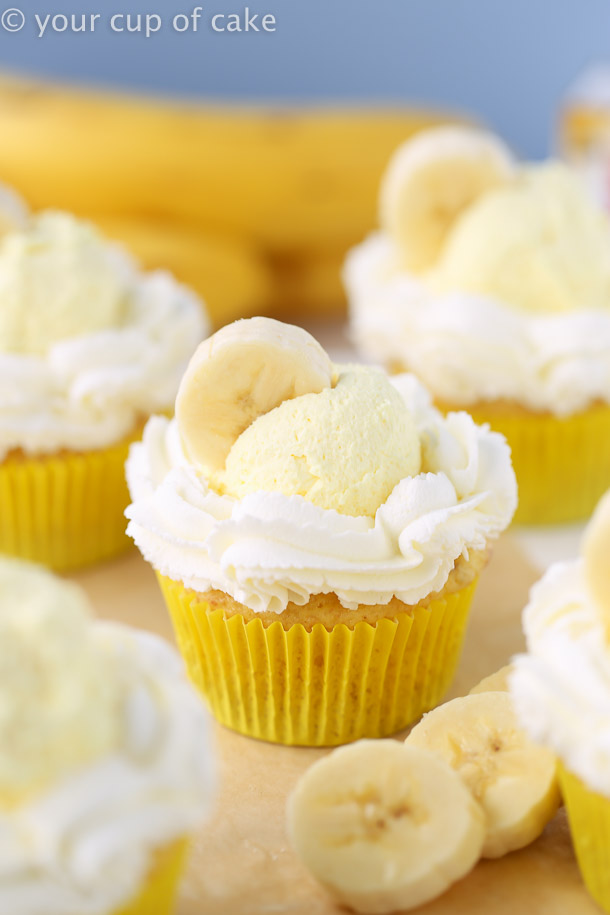 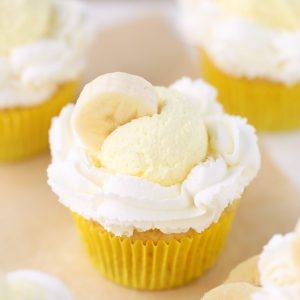